Amalia Del Ponte (Milan, 936) lives and works in Milan and Venice.
A pupil of Marino Marini at Accademia di Belle Arti di Brera between 1956 and 1961, she has been working for years on a personal, independent research matching her formal rigor with her interest for archetypes, a subject connecting art with the problems of science.
Since the beginning of her activity, in the early 1960s, she has addressed the question of the void, of light, and of the inner structure of matter.

In a 1968 show at Salone Annunciata in Milan she introduced Ipotesi di un grande tropo (Hypothesis of a Large Trope), a site-specific installation suggesting – through guidelines drawn on the floor and panels showing the views filtered by prisms – the presence of a virtual trope generated by calculations on refraction and reflection indices. At the time, as a matter of fact, technology had not evolved enough for such large Perspex structures to be feasible. During the same year, at the Eurodomus exhibit at Palazzo delle Esposizioni in Turin, Amalia Del Ponte experimented with another solution for building a large trope, as she filled a prism-shaped Perspex container with water; although the container had been seal-checked by an engineer, the Perspex could not sustain the weight of the water, and the artwork collapsed.

In 1969, Del Ponte managed to have a 190-cm-high Pserspex prism produced; Arno Hammacher took a picture of it, set in an evocative construction yard.

In May 1972, again at Salone Annunciata, she publicly presented the results of a two-year research on large-scale tropes (ca. 190 cm of height), as she exhibited Tropo n° 1, How do you feel?, U.S.A., Presenza/Assenza, Omaggio a Borges: Finzioni, Mattia. She also animated the walls of the dimly lit gallery by projecting a series of large pictures of liquid crystals seen at the microscope.

In 1973, Bruno Munari and Umbro Apollonio invited her to participate to the Sao Paulo Biennale, where she exhibited three works: How do you feel?, Shan and Area percettiva. The latter was a cubical environment (6 meters on each side) with angles and corners smoothed out on the inside, painted white and lit by a blinding white light. Inside, she placed two large Perspex prisms and four landmarks: a postcard, a card with a telephone number written on, the plaster impression of a hand and two marble eyes.

On this occasion, Amalia Del Ponte was awarded the First International Prize for Sculpture.

During the 1970s she abandoned this medium in order to devote herself to research of a more conceptual nature. The artworks produced across the decade employed different materials and objects, often foreign to the artistic sphere. Amalia Del Ponte meditated on her condition as an artist, looking for new forms of expression, challenging the very principles of her previous research, and delving deeper into the process of dematerializing sculpture.

In 1974, in a solo show at Galleria Toselli in Milan, she introduced her Accrescimento di un cristallo (Accretion of a Crystal), accompanied by a typewritten text titled Intuizione alla conoscenza dei fatti (Insight to the Knowledge of Facts). On such occasion, Amalia Del Ponte hinted at a possible development of the idea: “I am preparing maps intended as images of mental and geographic routes; as if searching for things in such a way that personal experience also becomes shared experience”.

During the next three years, she took part to group exhibits held in important venues, both in Italy and abroad, where she mostly showed works from previous years: it was a period, as she herself puts it, “of musing”.

In 1977 she took part to Expò Arte. Ipotesi ’80 at Fiera del Levante in Bari, invited by Lea Vergine together with other female artists devoted to Feminism. Amalia Del Ponte presented Culturae: florum omnium varietas (Nascita), dedicated to her daughter: a meditation on the nature of womanhood and the privilege of giving birth.

Between 1978 and 1980, Marina Urbach invited her three times to show her works at the C-Space in New York. For the third exhibit in 1980, she created Musica da camera per sei strumenti (Chamber Music for Six Instruments), on which Francesco Leonetti wrote:

“Amalia Del Ponte’s way of objectivizing employs the materials and objects of several disciplinary fields, each with its sources: scientific analysis, both classic and recent, psychoanalytical symbology, eighteenth-century concoctions, Eastern sacred texts, and so on. Hence a repertoire of evocative halos and rationalistic references, produced by the objects themselves and imprinted on the viewer. The very act of extrapolating and introducing, breaking up and putting back together, is central to this piece, with a vague feeling of theatrical magic, an added sense of dissection, a declared drive towards memory and music”.

In 1986, Del Ponte was invited by Arturo Schwarz to participate to the Venice Biennale, in the show titled Art and Alchemy. The curator asked to each artist: “How important is the relationship between art and alchemy for your everyday work?”. To which she answered:

“I believe the alchemist’s research is hardly different from the artist’s, if the latter is a subconscious projection of psyche. Or rather, the alchemist is an artist whenever he tries to discover the essence of matter, and reproduces it by intervening in chemical processes according to a “human” pace, for lack of a better word. […] Conscience addresses the inner part of us, our deepest nucleus discovers its own substance. As the alchemist cleanses the corpus from all superfluitates by exposing it to blazing fire, the sculptor, gouge mark after gouge mark, through a patient process of “subtraction”, reveals both form and matter of his imagination. In alchemy, purification or mundificatio is reached through numerous fractions of distillation; in sculpture, a similar effort is employed to make depth emerge onto the surface”.

Starting in 1985, Amalia Del Ponte worked for about a decade on a peculiar research on sound, with her Litophones, “acoustic stones, sound-shapes that reference to a dimension beyond the visible: they recreate the invisible correspondences between geometric shapes, musical scales and chromatic ones” (Eleonora Fiorani).

In several solo and group shows, she exhibited her sound sculptures, often together with performances by important musicians and composers – Encantar at Galleria Milano (1986), Magnamater at Superstudio in Milan (1988), Milano/Poesia at the Ansaldo Site (1990), La forma del suono at Galleria Belvedere in Milan (1993), Labyrint van klank at Fort Asperen in Utrecht (1993), and finally in an individual room at the 46th Venice Biennale, in the Italian Pavillion at Giardini di Castello, curated by Gillo Dorfles.

In 2005, she showed Acqua at Fondazione Arnaldo Pomodoro in Milan, during the exhibit La scultura italiana del XX secolo curated by Flaminio Gualdoni.

Moving on with her research, free from the pressure of critics and art dealers, in the last few years Amalia Del Ponte has developed a striking poetic sensitivity, nurtured by her fascination with the ephemeral and the invisible, and backed up by her continuous experimentation with different techniques: video, performance, installation, photography.

In 2010 she created a site-specific project titled Regno dei possibili, invisibile for the Case Matte (formerly Austrian armories) on the island of di Certosa, in the Venetian Laguna. Anne Marie Sauzeau Boetti described the work with these words:

“One meter away from the Laguna, in the four casemates, there are four round windows: like the slide in a microscope, like the portholes on a ship from a Jules Verne novel, like the circle closing on the last frame of a silent movie…
In the portholes we can see the part of Laguna below the island of Certosa, four ‘dives’ in the water hidden under our feet… The extravagant creatures thus appearing, one after the other, in the windows vibrate and move, and they also produce gasps, cries, rustling.
In front of images so incredibly enlarged, our eyes can barely notice the differences between animals and plants (is it perhaps sound? Are plants silent?).
[…] Amalia divided these two adjacent realms between casemates 1 and 2. Casemates 3 and 4 offer a whole different experience: it sill concerns our eyes and our ears (with real music) but the ‘creatures’ are not visible, not even with the most sophisticated instruments. That which appears, then, is a series of translations or equations, mathematical hypotheses (such as the DNA spiral). These wonderfully varied, abstract shapes are entirely mental, conceptual. Nothing biological can emerge, and life remains invisible, ineffable.
This formal offering is addressed to the inner eye: not the rational mind, though, but rather the sensitive, immediate one: a sixth sense”. 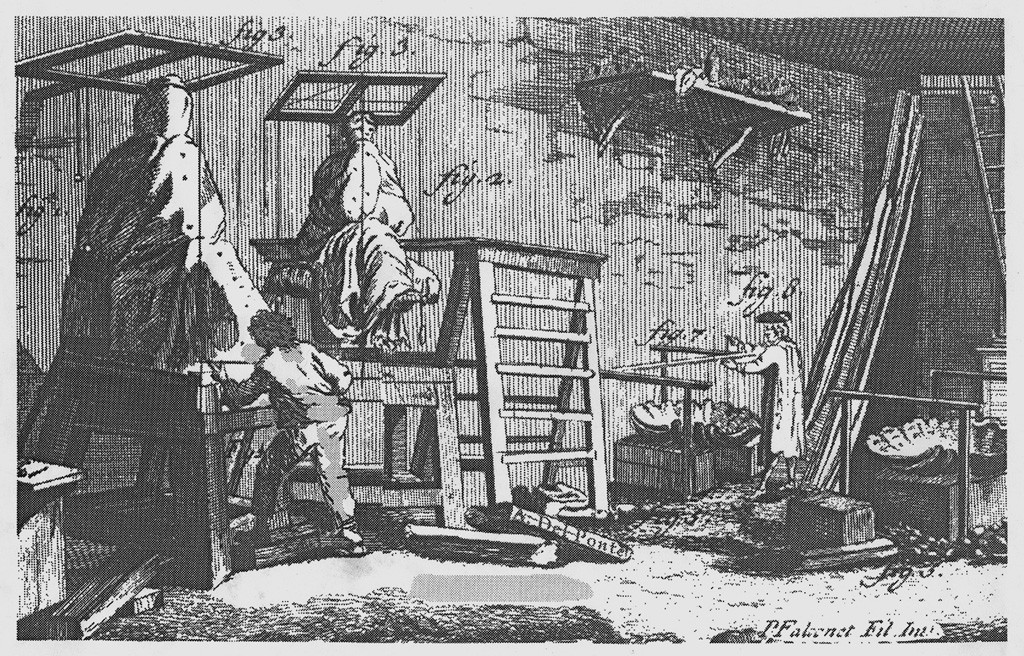