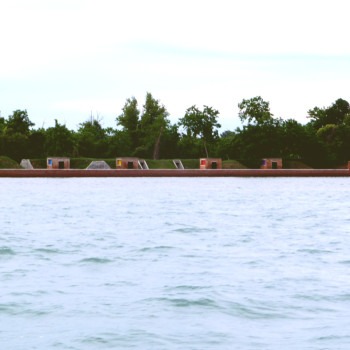 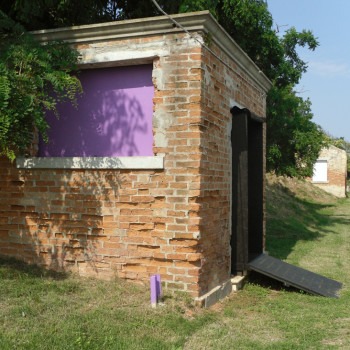 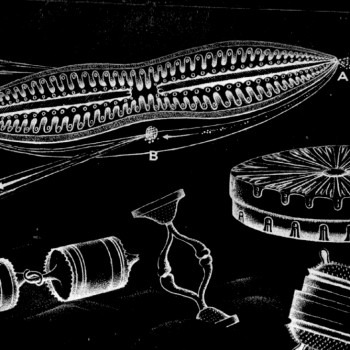 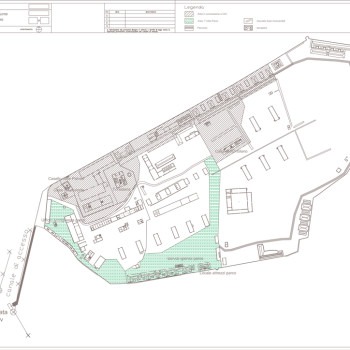 Four kingdoms below the surface (invisible but possible kingdoms)

Two of them belong to the traditional “leçons-de-choses” categories: animal, plant and mineral kingdom. It should be noted how easy it is to get confused among these kingdoms (as with corals, sponges or Amalia’s favorite: crystals).

Through the lens of a microscope, then, these kingdoms become even harder to tell apart. The powerful visual prostheses allowing us to see one thousandth of a millimeter turn plants and animals into shapes undistinguishable to the “regular” eye. And the amazing part is: they are all alive.

Such primordial, microscopic soup keeps moving restlessly, transforming and even producing sounds. One meter away from the Laguna, in the four casemates, there are four round windows: like the slide in a microscope, like the portholes on a ship from a Jules Verne novel, like the circle closing on the last frame of a silent movie…

In the portholes, we can see the part of Laguna below the island of Certosa, four ‘dives’ in the water hidden under our feet… The extravagant creatures thus appearing, one after the other, in the windows vibrate and move, and they also produce gasps, cries, rustling.

In front of images so incredibly enlarged, our eyes can barely notice the differences between animals and plants (is it perhaps sound? Are plants silent?). the same extravagant shapes, the same essential outlines: for the eye, is one general aesthetic experience concerning a mysterious micro-biology.

However, Amalia divided these two adjacent kingdoms between casemates 1 and 2. Casemates 3 and 4 offer a whole different experience: it sill concerns our eyes and our ears (with real music) but the ‘creatures’ are not visible, not even with the most sophisticated instrument. What appears before us, then, is a series of translations or equations, mathematical hypotheses (such as the DNA spiral). These wonderfully varied, abstract shapes are entirely mental, conceptual. Nothing biological can emerge, and life remains invisible, ineffable.

This formal offering is addressed to the inner eye: not the rational mind, though, but rather the sensitive, immediate one: a sixth sense. In casemate n. 3, then, the line between mental and sensorial responses vanishes. In the three spaces visited so far, everything happens the same way… with the mind and the senses. Hypnotically. Something similar happens in the fourth casemate, since it is there that the viewer’s subconscious is stimulated to produce a spontaneous response to the images recorded by Amalia’s subconscious (and art): here, her visual offering takes the place of a hypothesis science is still (so far) unable to visualize. By spontaneously dreaming of shapes responding to those proposed by the artist, the viewer’s subconscious mind will complete composite, accidental shapes, as extravagant as the “cadavres exquis” of the French Surrealists: a sort of mental, automatic, indefinite plankton. The sequence of the four casemates invites us to embark on an endless voyage, a sensorial and mental immersion that takes us from the most secret form of biology to the most intense mental activity… Ranging from the structures of mathematics to the most incredible seas of the subconscious.

In the worlds of contemporary wonder

It is an initiatory path of knowledge, meant to awaken the dormant spirit of things, hidden both outside and inside of us, lingering inside, below, around the island; but it is also a path of pleasure for the eye, for our gaze. It is through vision that the subject is revealed to itself and finds access to the original Being that both surrounds and permeates us. The artist’s vision sees and shows what the world is missing in order to became an artwork; it sees the presence of the matter of the world, which would otherwise remain hidden. This is the meaning of the optical lenses that make it possible for us to experience what we could not experience before, to immerse ourselves in the elsewhere outside and inside of us, in the desire of a place we belong to, even if we were not born there.

It is here that the invisible meets the visible, since the seeing opened up to us by the artwork – as Merleau-Ponty once wrote – actually means seeing more than is normally visible, by entering the ontological dimension of latency.

It means seeing into things to detect the silence that surrounds them.

Amalia Del Ponte has always looked from the side, at askance, searching for what is not visible, the space or interval between material bodies in her sculptures, or the light that gives life to them, together with the reflections of Perspex, or the voice – or sound, or singing – of stone and marble.

Hers is a vision in reverse, able to perceive the pauses between things and listen to their voice. Hence, the peculiar use, here, of science and technology, both manipulated – as in the work of the beloved Gabo – in order to give them a different, broader sense, that of a beginning where unexplored opportunities, as well as the possible alternative relationships between man and knowledge (or technology), can be sought and revealed.

The work of Amalia, Il regno dei possibili, invisibili for the island of Certosa in Venice is perfectly coherent with its venue, even though it was not specifically conceived for it: as a matter of fact, it perfectly understands the place in the plurality of meanings it engages. Place as island, a creature of the water, enshrining the secrets of life; a place for the evocation of origins, of a primordial condition; but also a symbolic place, filled with endless narratives, the archetype of the perfect shape, of a land of joy where the fascination of utopia becomes reality.

Moreover, the artwork finds a connection between the new part of the building complex and its stratified memory, in the contrast wall, in the four casemates, so silent in their precarious condition, and yet still standing. In each of them, through the floor, Amalia embedded her portholes/lenses, each showing its own world, as she diffusely describes and accurately explains: microorganisms belonging to the animal kingdom in the first, to the plant kingdom in the second, as shown by a microscope or – when it is not possible – in drawings (third casemate). The fourth space hosts a video with images of our subconscious. Amalia Del Ponte’s achievement, however, goes far beyond the basic description of her work: it consists in what takes place thanks to this project. The use of simulation, of drawings, of film does not give access to geometric truths, but rather to sensorial presences recreating an osmosis between us and different forms of life, between us and the ‘other’ that dwells in us, between us and the stuff the world is made of.

The porthole, as a matter of fact, is the modulation of a preliminary space, an opening, an architecture of the void – or of the elsewhere – where the invisible becomes visible. And what happens is actually an event, the manifestation of a presence in which the viewer, the whole space, the artwork that transforms its visual coordinates, all constitute an indivisible totality.