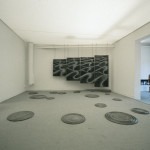 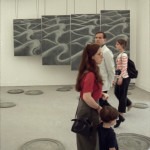 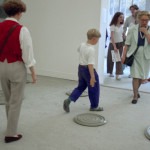 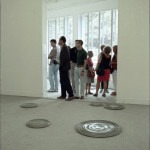 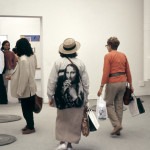 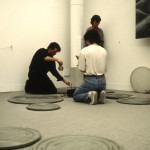 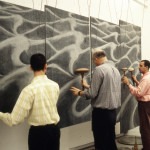 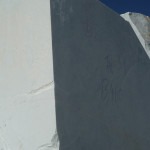 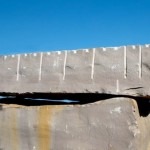 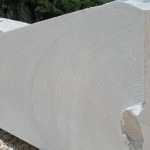 If it seems that the works of Amalia Del Ponte have no figurative reference or show a lack of figure study, in reality the reason is due to the marks the artist makes on the material she uses, and the feelings she conveys on the hard marble surface, thus making the osmosis between artist and medium more meaningful. The sculptress, who has created many works of art, sees the importance of proportion and at the same time the relationship between musical and cosmic harmony — in this particular part of her work she has created a series of wall sculptures in stone (marble, serpentine etc.): Acqua nell’acqua, made from large layers of tombstones, worked and carved so as to make slight undulations that create light and shadow, embroidery and paths, almost resembles misterious aquatic landscapes. The fact is, these works have a malleable and graphic quality as well as an ‘acustic’ one (these layers also known as ‘lithophones’, can be beaten thus obtaining a mysterious sound) which only adds to its charm, as happens in the series of Musica in gocce: a path of marble discs (in Turkish marble) of a luminous, transparent sort of green —yet another metaphoric image, aquatic and musical at the same time — where the concentric forms dug from immaginary drops, build another mirage seen in the marble. Apart from the number of these works and the opaque sound that comes from these compositions, these sculptures bear witness to the acute malleable sensitivity of the artist and her ability to integrate her qualities as medium with the intimate nature of our corporal vibrations.

“What an admirable tool for our sight, hearing and touch is the one sculpted by Amalia Del Ponte. It is a sculpture, of course, but also music and painting: a yearning towards the unification of senses, or an event that of spirit and matter. This Milan-based artist had deserved to be invited to the Biennale for decades, and Dorfles was right when he choose her for the Italian Pavillion. If the latter is less country-fair-like than usual, it is mostly because of her and other few artists: Amalia Del Ponte emerges like a gong, Nunzio by ascending along the wall, Spalletti by levitation, Parmiggiani by angel-like displacement. For too long Italian presences have delved in noises making both fruitful exchange and isolation impossible. Solitary yet scrappy, willing to protect the identity of her art in the most challenging rooms of the whole venue, Amalia Del Ponte has intensified the perceptual interactions she is used to create among matter, image and sound, propagating them beyond the room, into a more articulated environment. She suspended four slabs of serpentine marble, “Water into Water”, patterned with wave-like shapes recalling Hokusai – stones ready to be stricken with a stone clapper – and made their pores, their veins resound. Then, the doomed passageway room, where tones risk to get lost. Amalia covered its floor with drops of green marble, so you can see where you put your feet: “Music in drops”, recorded and played. A few pictures show the viewers how to play the lithophones, if they wish to do so. I adore the stone performances induced by Amalia: they are just enthralling. Her visual-acoustic installation is also the result of body discipline, governed by a private meditation – a consequence of her frequent journeys to the Far East – which she never shows off. The performances should be severely personal: it’s the only way a drop can alter the stone, and the soft can defeat the hard, as a certain Taoist once said.