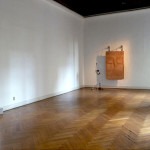 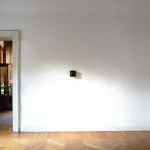 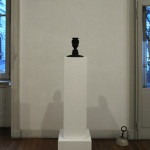 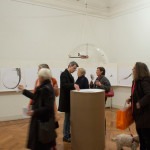 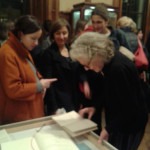 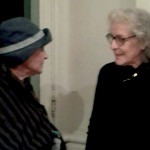 Amalia Del Ponte’s latest exhibition presents visitors with a sensory experience of ineffable and barely perceptible signs, sounds, and passages of light and shadows. This is the first time the artist has exhibited the installation Ars Memoriae (The Art of Memory), 2014: twenty-one India-ink drawings of animal tails, which look as fleeting as ghosts, bodies that can be intuited but not seen. The animals are presented in alphabetical order.

At the center of the installation, the artist has constructed La ruota della memoria (The Wheel of Memory), 2014, in which visitors can turn two overlapping paper circles to discover fragments of discourses that come together in various ways, giving rise to surreal, incongruent phrases that leave space for the imagination, not without a sense of irony. Meanwhile, La porta senza porta (The Door Without a Door), 2015, is a paradox. It is a light projection on a wall accompanied by an emergency exit handle. Its extended luminosity finds a counterpoint in the small luminescent spot of Il nano illuminate (The Illuminated Dwarf), 2012, which is surrounded by a disproportionately large wooden frame. An LED here pulsates like a small star lost in deep space. The sound of Potnia, 1989, seems to arrive from similar depths: A lithophone made of travertine can be struck with a little hammer, making the idol-like face sculpted into its stone resound. Finally, witty reversals between seeing and imagining are condensed in a small wooden sculpture, Io (I), 2011, where the artist, via her negative profile, seems to look at herself.

Amalia Del Ponte’s “Door Without a Door” at Galleria Milano

Amalia Del Ponte’s decade-long research, especially if seen from a historical perspective, now possible, is still extremely interesting, first and foremost because of its most distinctive quality: a consistency that is, at the same time, multifaceted. Such feature is very evident in the installations shown in the current exhibit at Galleria Milano.

The works chosen for the occasion are few but often extremely important, as they make it possible to better understand the fundamental aspects of Del Ponte’s art, in which a subtle yet resolved conceptual mold has worked together with what could be defined as a form of warm lyricism, an engaging poetic mood able to imply the viewers in the logic of the artwork, releasing them from their traditional role of beholders and turning them into actors of the whole aesthetic experience.

As an example, we would have to choose the lithophone placed in the middle room of the gallery, a piece from 1989 titled Potnia: a large slab of travertine with a face sculpted in bas-relief. When hit by the viewer, using one of the tools at his disposal, the piece emanates a peculiar, fascinating sound that permeates the whole space, allowing us to look at the stone and hear its music at the same time, in a touching mixture of senses. As a matter of fact, Del Ponte has always been interested in a kind of perception that moves beyond the limits of the visual, in an attempt to capture the uncontrollable energy of the world: the artist has long worked on this, achieving very convincing results, like this crucial work.

Another interesting achievement, only apparently different, is the recent, very complex installation titled Ars Memoriae (2014), in some way a visual transposition of the technique identified by the same Latin expression. Giordano Bruno had studied the phenomenon, treating it not as a mere rhetorical device, but rather as a form of knowledge. Again, the viewer is called upon to act, putting his or her own imagination to work, through a figural alphabet made of images instead of letters, of subtle, sometimes barely visible signs.

Of a more explicitly symbolic nature is an assemblage inspired upon the work of William S. Burroughs, an American writer and painter whose uncanny visions Del Ponte interprets visually [The Naked Lunch, 1974]. Yet another work, Il nano illuminante (2014), is more firmly conceptual, as its simple conception actually inspires thought on a crucial subject like nanotechnology. A baroque, flamboyant frame encloses – almost hiding it from our gaze – a microscopic dot of light that, nonetheless, manages to find its way through matter. The Door Without a Door, in conclusion, is an exhibition where the viewer gives up his passive role in order to share with others (including the artist) an intense, vibrant aesthetic experience.